Mahavishnu Orchestra were one of the most finest jazz fusion bands of the 1970s. Fronted by the extremely technical yet gentle legendary jazz fusion guitarist John McLaughlin, the band underwent several line-up changes or different ‘incarnations’ as it refined its sound and style throughout the 1970s and 1980s. Initially active between 1971 and 1976, the band was ‘revived’ between 1984 and 1987 as well. All through these years, the main musical figure and pivotal member was John McLaughlin, a great guitar hero of mine.

By far one of the most refined jazz rock groups of the 1970s, successfully blending elements of progressive rock and world music into their exquisite well-established jazz fusion sound, Mahavishnu Orchestra were never one of the most popular acts of their times, let alone of their genre, being moderately successful in commercial regards, yet achieving cult status among longtime fans of the jazz fusion genres along the passing of time. While they did not achieve mainstream radio airplay during the 1970s or 1980s, it is very hard to ask a true jazz fusion fan (regardless of their age) which most notable bands of this genre pop in their minds and not name Mahavishnu Orchestra as one of them.

Drawing its title from the Hindu religion, more specifically from the supreme god and protector of the universe Mahavishnu, the band was able to establish a strong niche of devoted fans across many decades, despite its lack of commercial success and popularity.

Their only gold-certified studio album by the R.I.A.A. was ‘Birds of Fire’ which was released in 1973. Otherwise, no other record in their catalogue achieved this performance. Between 1971 and 1999, the band released 8 studio albums, both during the time they were active (mostly as a quintet and only for a short time as a quartet in 1976) and post-career, so to put it. Their studio albums are as follows:

Mahavishnu Orchestra sparkled my attention way back during the 9th grade, when I started high school, with the post-career record ‘The Lost Trident Sessions’ (their last LP in the list above). I listened and listened to it for weeks and after years and years still got back to it in order to relax. Indeed, it is a very elegant, soothing type of music that this band managed to create and record. The composition is very refined and complex, just about to the liking of my taste. Briefly put, musically, quite my cup of tea! 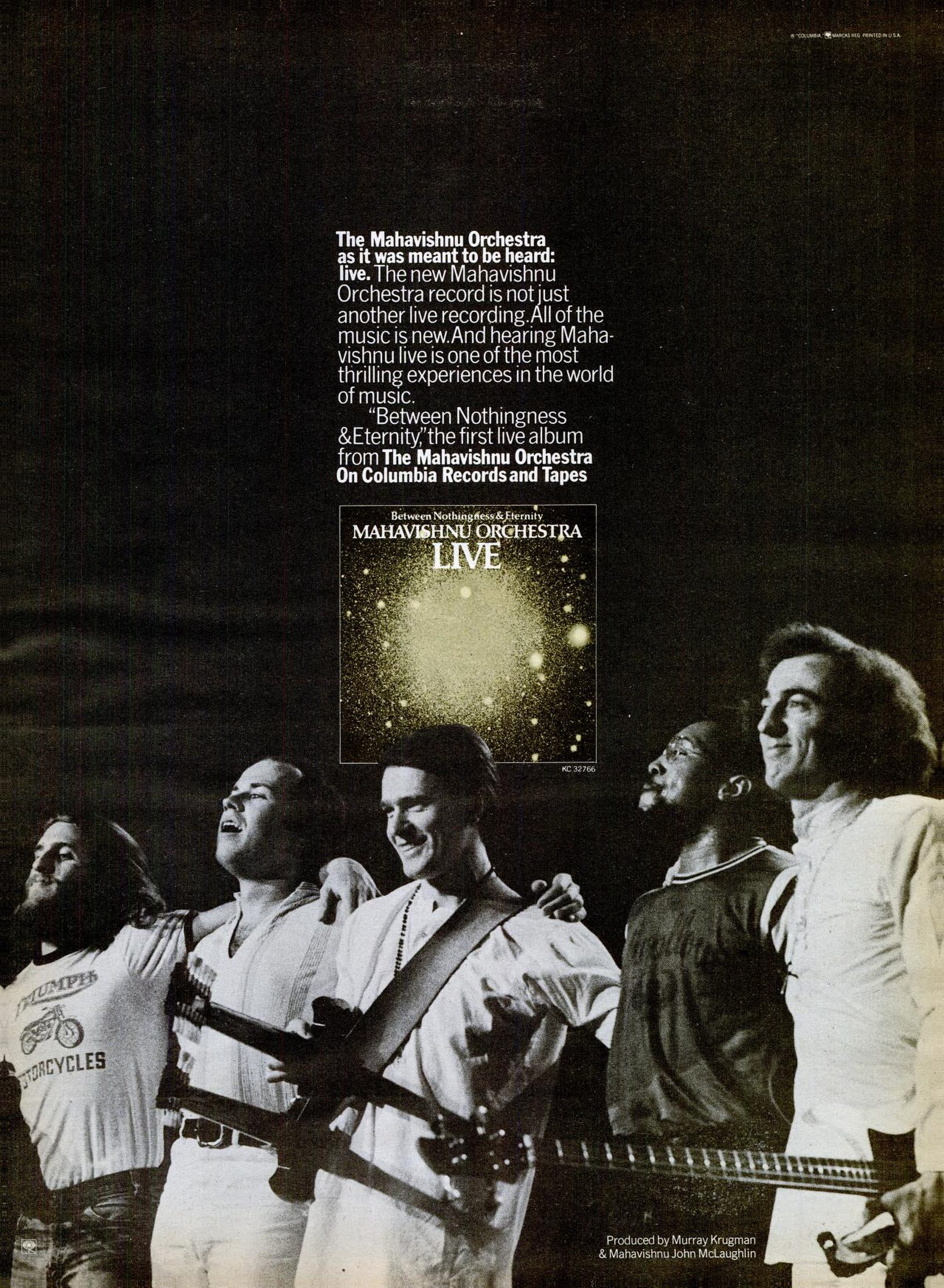 Mahavishnu Orchestra, on a Billboard Magazines 1973 advert for their live album ‘Between Nothingness and Eternity’. Image source: Commons Wikimedia

Aside from being a distinguished guitarist and performing on even a double neck electric guitar in Mahavishnu Orchestra (which, in all fairness, can be mostly equated as his band or personal project just like Weather Report was to frontman and keyboardist Joe Zawinul), McLaughlin also provided vocals on some recordings of the band (more specifically between 1975 and 1976).

The band was initially signed with Columbia Records, just as Weather Report for example, another legendary jazz fusion band. Apart from John McLaughlin, its frontman and main unchanged member throughout all of its line-ups or ‘incarnations’ as the 1970s and 1980s progressed, other notable members of the band include: Jan Hammer (keyboards), Billy Cobham (drums), Jerry Goodman (violin), and Rick Laird (bass guitar).

Last but not least, John McLaughlin is also known as ‘Mahavishnu’ John McLaughlin, in reference, that is, to the jazz fusion band he fronted, co-pioneering, as such, the creation and rise of a fascinating and fantastic new musical genres, harmonically meddling jazz and rock in epic proportions. In fact, their musicianship produced a noteworthy legacy that continues to influence artists to this day. Massive Attack, for example, sampling some of their songs. Furthermore, The Mars Volta and Opeth have also cited Mahavishnu Orchestra as one of their influences.

Down below are a series of most favourite songs of mine from Mahavishnu Orchestra’s discography. I truly hope you will like them! All the best, much health, take care, stay safe, many blessings, and great peace your way! Namaste and God bless you! Rock on! 😊🙏✌️☮️🤘

P.S.: My all time most favourite song from their discography remains ‘Sister Andrea’. I wonder what’s yours or what are yours, come to think of it. Kindly tell me down below in the comments’ section. Thank you very much in advance! All the best once again!